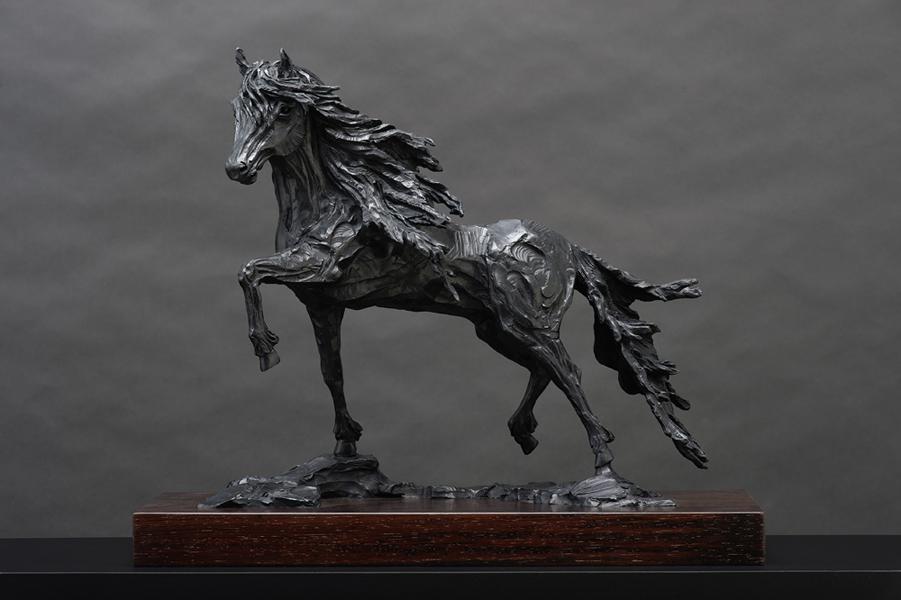 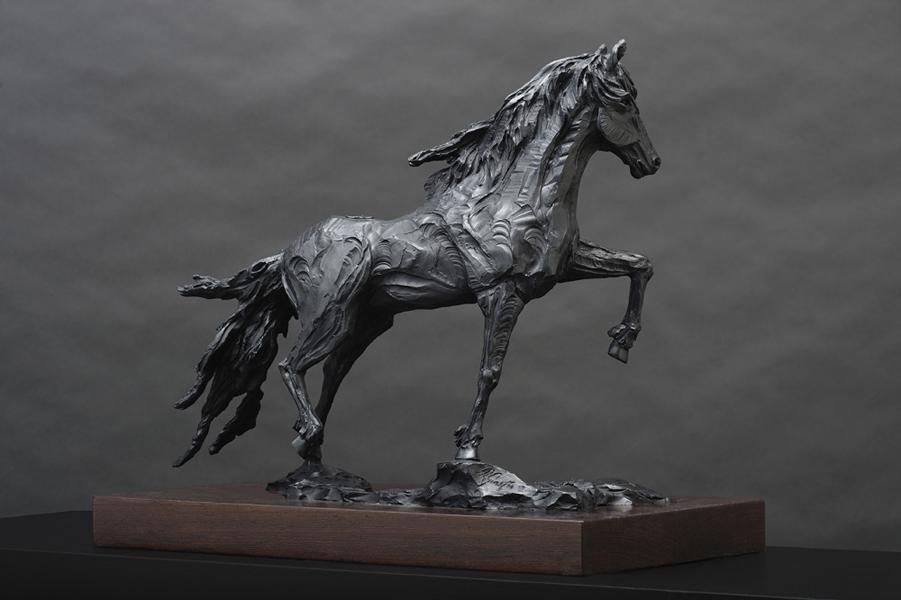 "The Friesian with their flowing manes and long tails must be amongst the world's most beautiful creatures. The one I chose to create is the "Belgian Black" in all his splendour.
The Friesian is probably best known for its black colour and luxurious mane, tail, and 'feathers' (long, untrimmed hair on the lower legs). It has a spectacular trot, both fast and high-stepping. The Friesian is very willing, active, and energetic but gentle and docile. A Friesian tends to have great presence and to carry itself very proudly. The breed has excellent overall conformation. Friesians have long, elegant, arched necks and fine extended short-eared (Spanish type) heads. Their sloping shoulders are quite powerful. They have compact yet muscular bodies with strong sloping hindquarters and a low-set tail. Their limbs are comparatively short and strong. Like fashion models, Friesians have good bone structure and impressive hair.


History of the Friesian
The breed was developed in the province of Friesland in the northern Netherlands, where there is evidence of thousands of years of horse populations, and this breed is said to have descended from the primitive Forest Horse. The Romans used the breed for riding. It is also said that Romans took Friesian horses to England, where the breed influenced the Shire, Clydesdale, Fell and Dales. Once thought to be ugly, this northern-European-mainland breed is now considered among the most beautiful of horses. "Black is [now indeed] beautiful."
Friesians were used in medieval times to carry knights to battle. In the 12th and 13th centuries, some eastern horses of crusaders were mated with Friesian stock. Sometime after the Middle Ages came to an end, the Friesian breed was dying out. Soon there was only two left, fortunately male and female. They were carefully captured and bred in an attempt to bring back the breed. During the 16th and 17th centuries, when there was less demand for heavy war horses as battle arms changed and especially when Spanish forces occupied the Netherlands during the Eighty Years' War, Andalusian blood was added to lighten the breed in order to lighten its weight and thereby render it more suitable (in terms of less food intake and waste output) for work as a more urban carriage horse. Friesians were also used by riding schools in France and Spain for high-school dressage, and they remain a student-favoured breed to this day for their gentle temperaments and proud dark beauty.
The breed was especially popular in the 18th and 19th centuries, when they were not only in demand as harness horses and for agricultural work, but also for the trotting races then so popular. The Friesian was used as foundation stock for breeds such as the Orlov Trotter, the Norfolk Trotter (ancestor of the Hackney), and the Morgan. In the 1800s the Friesian was bred to be lighter and faster for trotting, however this led to what some owners and breeders regarded as an inferior stock, so a sort of revolt and call for a return to pureblood stock took place by the end of the century.
Friesian horse populations then dwindled in the early 20th century partly due to displacement by petroleum-powered farm equipment and passenger vehicles. Due to fuel rationing during World War II the Friesian’s farm and carriage use was revived, saving the breed long enough for both its population and popularity to rebound and to this day remains one of the most beautiful of horses.