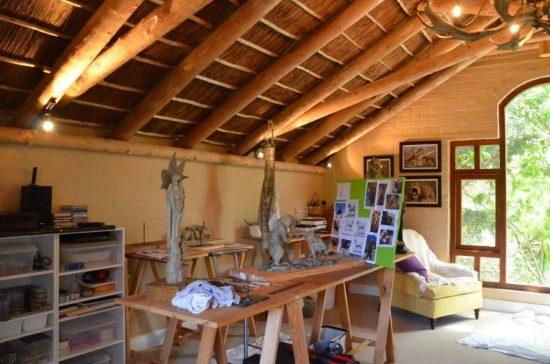 Recently, I found this article that appeared in the Echo, January 26, 2017 – “Sun Valley sculptor brings life to art”. The article was written by Karen Kotze.

Here is the full article:

“Some artists need elaborate, word-heavy articles. With others, their work speaks for itself. This is the case with Sun Valley resident Richard Gunston.

“In his home studio, exquisitely sculpted animals meet your gaze. The detail on one horse’s face was such, that by the time my hands cupped her muzzle, I was expecting to feel her warm breath.

“Upstairs – in the space that these animals are coaxed into being – is Richard’s latest piece: Nature’s Child. He says there is a French-styled romantic feel to the piece; a woman with flowers in her hair, a Mona Lisa smile and a bird in one hand – her other hand resting on a young deer.

“There is dreamy delicacy to the scene, a gentleness which is a salve for the troubles of the outside world. Richard has taken from the earth to mould and create, with clay, aspects of his awe and appreciation of animals and earth and our connectedness with them.

“‘My need to be at one with nature led me to take hikes in the Himalayas and a trip to Everest Base camp. I followed the Inca Trail to Machu Picchu and watched dawn break through the sun gate. I walked through ancient Kathmandu,’ he says, eyes shining.

“‘I marvelled at the lost magnificence of the rajahs in India, the mysticism of ancient Egypt and the allure of Petra in Jordan. And the timeless pace in the Arctic where bones have had their earthen graves for thousands of years; but appear to have recently turned from life to eternal rest. A more beautiful place there cannot be – yet, there is so much more.’

“He says animals were always a warming part of these encounters.

“Against the wall of a stairway in his home are memories of these trips; and animals. Between the prayer flags from Tibet and snowy shots of Everest base camp, are a range of pictures of him with an assortment of creatures. There are two photos of Richard with scarlet Macaws on his arm and a face lit with the wonder of being alive – taken in the Amazon.

“It is this moment of connection and recognition that has called Richard’s hands to clay.

“And it is his earnest desire to capture his subject’s soul which is, without doubt, what makes them come alive in his hands.

“It is astounding that the level of talent Richard has, is self taught. He is quick to say he did have a two-hour lesson once, just on how to use the tools.

“Laughing, he describes himself as rather OCD and exceptionally analytical, methodical and systematic.

“‘My work ethic is to pour myself into what needs to be done. I don’t go home at 5pm, I turn that light off only when the job is done, and this carries through to my art,’ he says.

“‘It’s done when it tells me it is.’ He winces – can he call it art if he doesn’t have a fine arts degree, he asks. And I am immediately grateful that hasn’t had this purity of approach educated away.

“‘But those in the know have told me I focus too much on the detail, that I should abandon it, as this is not art,’ he says.

“On the table to one side is a rough-shod figure of a woman. He looks positively aggrieved. ‘I did that on the instruction of a friend who is very well established and has the necessary degree. She counselled me to cut loose, to put on Def Leppard and bash out something more, arty.’

“Richard laughs, saying he can barely look at his attempt at this abstract piece without wanting to fix – and finish – her.

“‘I think it comes down to personal expression. Some people love the abstract and representational stuff. And there is following for that. Just as I hope there are those, who will relate to what I do?’ he says.

“At 50, after a recent retrenchment, this is the first time Richard has had time to focus entirely on his art. He paints too, and has built most of his studio with his own hands. Shadows cast by an oak tree that he planted, from an acorn, dance across the window of his upstairs studio. The garden is an extension of the studio’s serenity and clarity.

“‘Sculpting can never be about commercialism, the exchange of money or the mass production of items that hold no worth, no meaning. It is rather about the investment in the soul; the joy and inspiration that it brings,’ he says.”