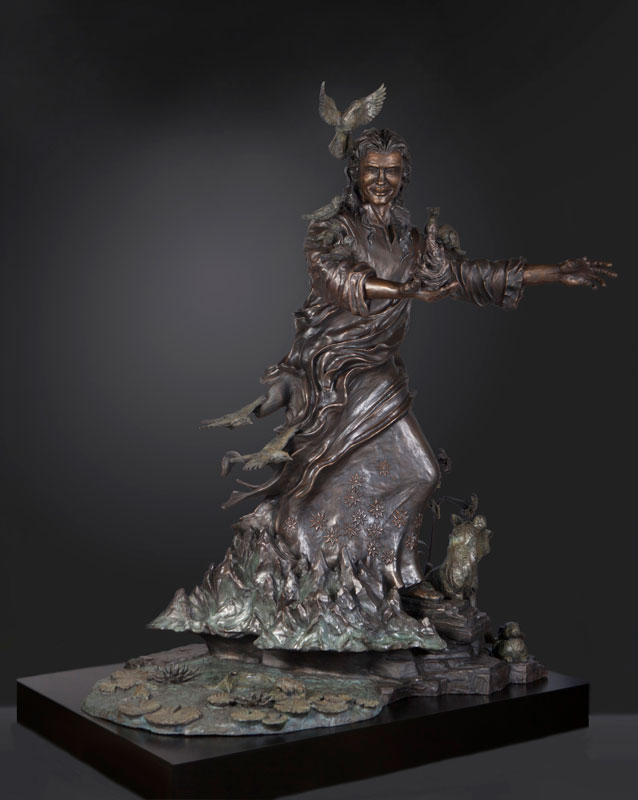 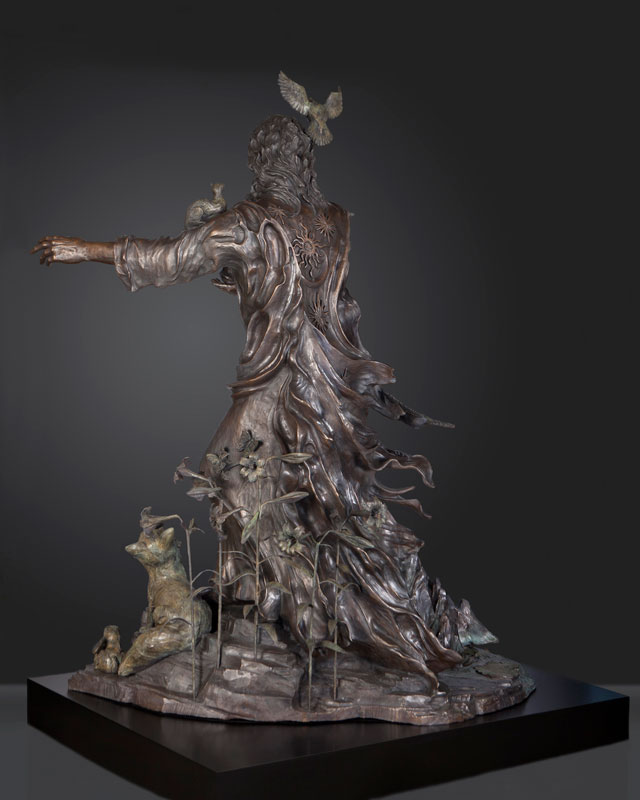 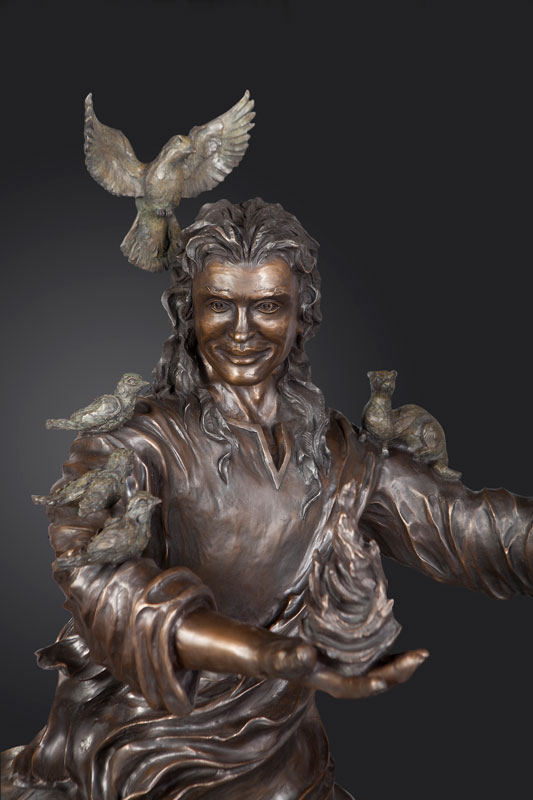 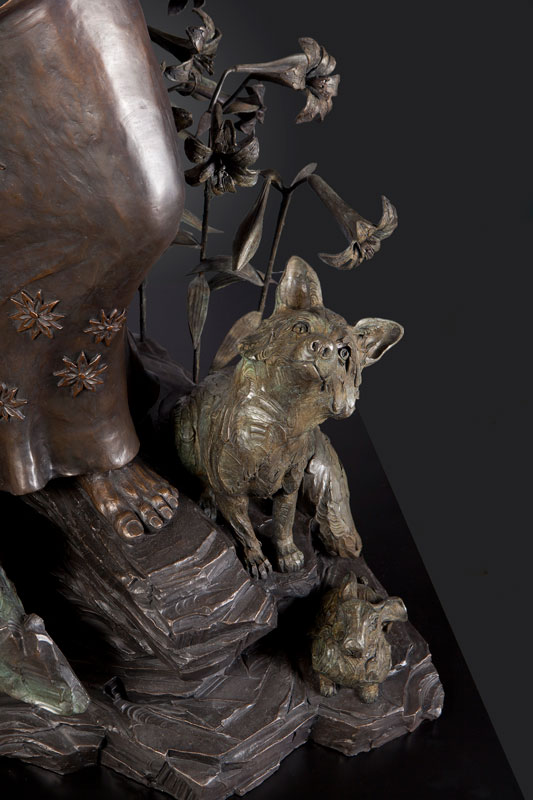 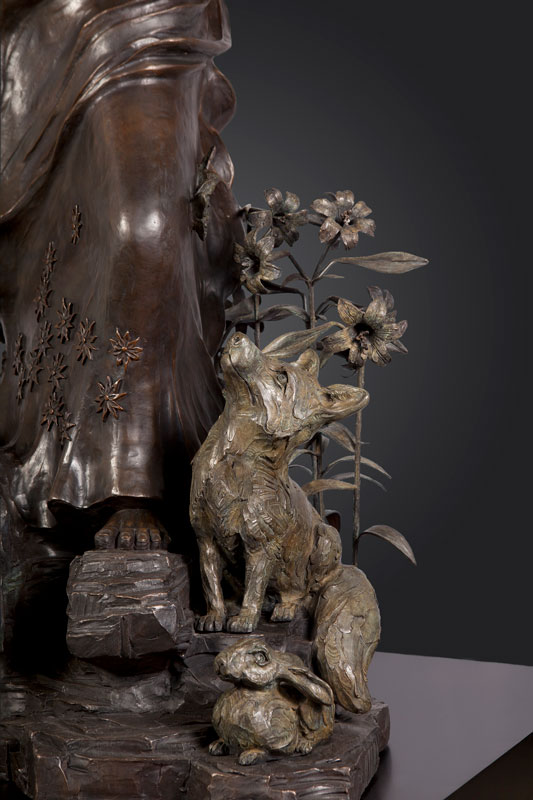 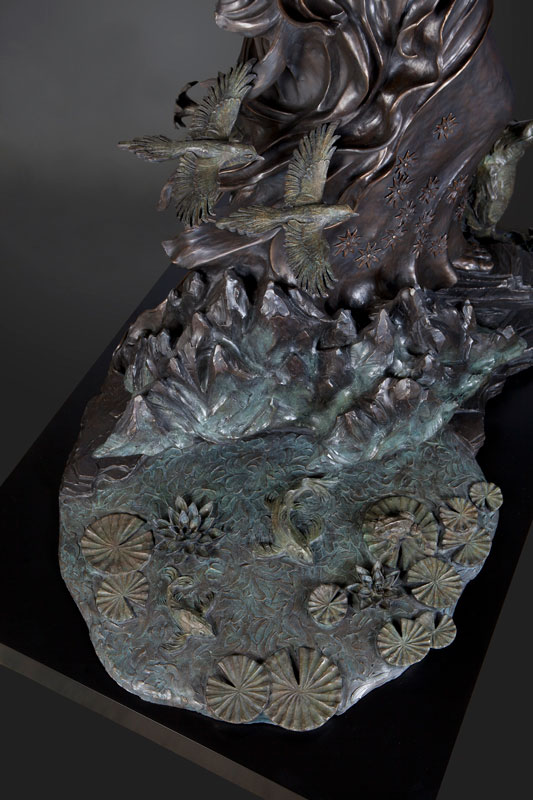 A challenging commission from a client to portray her beliefs in an image, reflective of teachings in all faiths as to who we are, who we should be or should aspire to be and the path humankind was meant to follow. An image of a spiritual being intended to encompass all spiritual beliefs with their foundation in the love and care of creation as a whole. Father of Creation encompasses the elements of nature and life namely, earth, wind, fire, water and the ether and the role that those elements play in our lives. Spirituality is more of an individual practice, and has to do with having a sense of peace and purpose and recognition of where we come from and the vital role we play. It also relates to the process of developing beliefs around the meaning of life and connection with all other beings. This sculpture was intended for all to view and draw from it that which means most to them based on their belief, understanding and place in the world.

Fire, the flame in his right hand represents both element and life. Fire is an essential element that affects all forms of life, often associated with renewal and development. In the spiritual context, fire symbolizes birth, resurrection, hope, purification, eternity and even death. Fire spiritually represents destruction and transformation at the same time. It suggests how life and death will always be two sides of the same coin wherein one cannot exist without the other and on the other hand, within the flame lies the values of will, determination, passion, and hope. Fire is transformative and when it merges with other elements, it can change and grow i.e. when fire encounters air, it grows bigger, and burns brighter.

Water is depicted in the aquatic realm sustaining all life. Nothing created can survive without water. It represents emotions as well (love for one another and all living things), new beginnings and purification. As our emotions are ever changing, so is water. Water indicates hope as it will help fade away negative emotions over time and return into its natural tranquil state of being. So it is hoped that mankind’s attitude toward creation can change to the spiritual belief that all living things on earth are to be cared for and nurtured.

Earth in the form of land (soil under his feet and the majesty in mountains), the foundation of all metals (bronze in the form of sculpture) with which he was created in fire. I have portrayed him as straddling both land and aquatic worlds, tying all elements together as one. The earth receives the “seeds” of all other elements and, in turn, bestows abundance upon us, a continuous cycle of creation on which we all depend.

Wind/Air is the breath of life sustaining everything, depicted in the visible manifestation of blowing cloth of his garments adding movement and definitive presence.

The ether is depicted in the sun, moon and stars on his back, the celestial energy that fills all spaces. The sun and the moon is your brother and sister as are the birds and animals of this world. We were taught in spiritual belief to respect and care for all living things and not to do harm.

As a human form when viewed from the top down he is in scale to the living beings around him and covers both land and water, he is god-like in stature when viewed from the bottom up, above the Himalayan Mountains, which is of strong meaning in the Buddhist belief, looking down upon all of creation. The plants, birds and animals of this world are represented as the sculpture is to be viewed from all sides to interpret the full story. They are listening to his teaching as portrayed by Francis of Assisi when he spoke to the birds. He is pointing the way/path that humankind was to follow in adhering to spiritual beliefs. The hand is not pointing, as this is disrespectful in many beliefs but rather open handed.

He is portrayed as a young man, smiling with empathy, love and compassion, young at heart. My intention was for each viewer who looks upon him to interpret all aspects within their chosen spiritual belief, to draw energy from what is interpreted and to perhaps bring about change in the hearts of those who do not share a love and appreciation for creation, for without it, we would not exist.